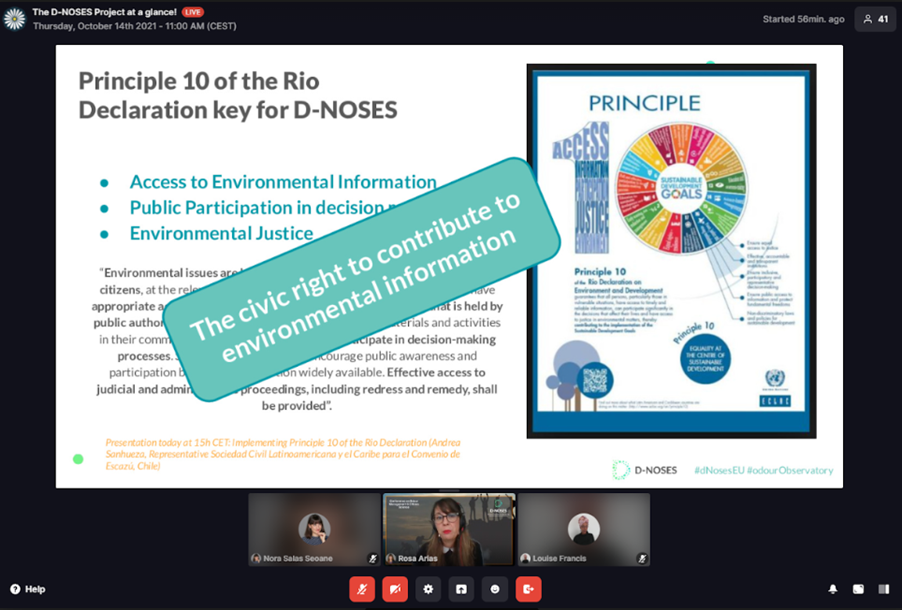 “It is not easy. We are trying to change the world, in a way. It is very important to team up and then you can make out of it really a full time and fulfilling job! If we are not having policy impact, we will be alone in our labs.” – Rosa Arias, Coordinator of D-NOSES

During the Engaging Citizen Science Conference in Aarhus, Denmark, in April 2022, the SensJus project discovered more of a distinctive case demonstrating the impact of citizen science in steering environmental regulation. The case is the Distributed Network for Odour Sensing Empowerment and Sustainability (D-NOSES). D-NOSES demonstrates how citizen science can help steer environmental regulation. It uses citizen science to target odour pollution – a type of air pollution that affects health and human well-being – at the local, national and global levels. It also demonstrates how forms of civic monitoring can play a key role in the multi-level governance of a specific risk, in this case odour pollution.

In the summer of 2022, we invited Rosa Arias, coordinator of D-NOSES, to share with us her experience on a remarkable achievement of the initiative. The interview was conducted by Anna Berti Suman from SensJus and Mohammad Gharesifard, from CitiMeasure.

Hello Rosa, can you briefly introduce yourself and your role in D-NOSES?

I am a chemical engineer based in Barcelona, and had the idea for OdourCollect back in 2013. Then, I was looking for funding, and I received first funding from the European Commission JRC, namely the MyGEOSS 2017 scheme, to develop the first version of the OdourCollect App for citizen odour monitoring, and after I could get bigger ones. I am the coordinator of D-NOSES.

Can you explain to us in a few words what is the main mission of D-NOSES and how it tries to achieve it?

At D-NOSES, we have a twofold aim:

Odour pollution is difficult to regulate since it requires sensorial measurements, and setting odour limits can be tricky. So, regulations vary from country to country, when they exist.

People working on this issue at the local level need to understand the context and specifically the national regulatory framework in which they operate, especially because there is a lack of a common European framework to guide the different Member States.

How are you achieving your mission?

We started by validating the methodology and collecting sound data. The noses of citizens are the best sensors to measure odours.

Most people, 96% of the population, have a “normal” sense of smell or olfactory acuity. This means that communities can record the type of smell they perceive, its intensity and hedonic tone, which measures how pleasant or unpleasant a smell is.

By combining individual observations, with a timestamp and geolocalisation, the project builds a clear understanding of the issue. The more citizens are involved in sharing their findings and data, the more robust the results are.

This is what D-NOSES achieved:

Our methodology is transferable to other environmental topics and projects. Through the quadruple helix model, we engaged industries in the 10 D-NOSES Pilots (public and private industries e.g. the waste treatment sector), throughout Europe, Chile and Uganda. We also conducted advocacy work towards policy makers and our pilots were selected based on the possibility to engage with the private sector. In Chile and Germany the waste water treatment plants even led the pilots. While in Barcelona, we started with the water authority and ran an ethnographic study before selecting a pilot. This allowed us to understand how a said odour would affect locals and to identify which stakeholders to approach first.

D-NOSES has also been part of the NEWSERA project. By participating as a pilot we reinforced and readapted our communication strategy. We focused on multilevel governance actors (local, national and European), both from the project and policy maker perspective. The project has helped us better understand who are our relevant stakeholders, their timings and political agenda and boost the impact of our activities.

After your event on Odour Pollution in October 2021 at the EP, the European Committee of the Regions (CoR) adopted unanimously at its Plenary Session on 27 January 2022 the Opinion “EU Action Plan: ‘Towards Zero Pollution for Air, Water and Soil“. Thanks to your advocacy, a paragraph has been included on the issue of odour pollution* recognising the importance of citizen science and public participation for tackling odour pollution and related challenges. What are the key factors that led to this outcome, in particular in terms of multi-level governance and based on your advocacy plan?

It was not an easy process, but we are a very motivated group of people. We had to accept some rejections before finding Members of the European Parliament (MEPs) willing to champion our cause. It was crucial that we knew the regulatory system and its gaps because it allowed us to speak the same language.

The fact that we involved all relevant stakeholders, including industry partners and affected citizens, in our project helped to back our claims, and our reputation preceded us, opening doors that would have otherwise been closed.

Of course the event at the European Parliament had a huge impact and carefully preparing the Green Paper in odour pollution and the Strategic Roadmap for governance supporting our session was essential to making sure the MEP opening was prepared.

Do you think partnering with cities that were your pilots would have been beneficial for opening doors and improving policy advocacy?

Cities can play an important role at the local level, even promoting local regulations. It could be the same at the national level e.g., if they start spreading the word to all the municipalities, but at the European level not so much.

The EP event is also mentioned on the Opinion Factsheet of the Action Plan among the key consultations that allowed for the creation of the Committee of the Region’s opinion on the “EU Action Plan: ‘Towards Zero Pollution for Air, Water and Soil“. How do you think this event actually influenced the final Action Plan, and can we measure D-NOSES influence on the outcome? Did you have expectations that were not met or was the result beyond your expectations?

It was really thanks to the fact that the Committee of the Regions was there that enabled the paragraph that we suggested to be included. This was way beyond our expectations. Without the presence of D-NOSES, that policy amendment would not have been adopted.

The challenge now is to understand what can be done with the paragraph. We are working to establish standards for monitoring odour pollution through citizen science, with the Spanish Organization for Standardization (UNE) and groups of experts, which will facilitate the official uptake of the methodology by environmental authorities.

Can you share with us the ‘don’t’ based on your mistakes, that other projects willing to have similar policy impacts should bear in mind based on your experience?

Don’t be impatient if you wish to have policy impact. Problems need time and so do policy adaptations. Manage expectations of stakeholders involved. For example, be transparent with citizens explaining that the odour problem will not be solved after the project, but that you are taking steps towards managing and/or regulating the issue.

Looking back at the start of the project, to what extent do you think the project outcomes (incl. contribution to the Opinion “EU Action Plan: ‘Towards Zero Pollution for Air, Water and Soil”) were planned or expected?

Since 2018, the start of the project, we were focused on having social, policy, scientific, environmental and industry impact. We involved political scientists in the project, to have proper insight into the policy field. We also produced more than 20 scientific publications to demonstrate the validity of citizen science to monitor odour pollution in real time from the receptor point of view. We produced important results such as the DIY guidelines for replicability or the International Odour Observatory to contribute to Principle 10 of Rio Declaration.

Looking forward, what policy change(s) at any level (e.g., organisational, political, etc.) would improve the ability of a project like D-NOSES to achieve other positive impacts?

We want odour pollution to be considered from the beginning, starting from policies and urban planning, before it is too late and the population is impacted. We also aim to control odour by engaging the affected communities directly to produce new evidence for industries to act upon the situations of maximum impact for the population. In a nutshell, we would like to continue implementing our multi-level governance model, aiming for a common EU regulatory framework that could guide the Member States, but also working specifically at the national level to be able to protect the citizens at the local level, since odour pollution is a localised issue:

To guarantee an environmental, social and policy impact of our work, it’s crucial to understand the local context, including the social, cultural and economic realities and the existing (or not) regulatory frameworks. It is also essential to deploy our citizen science methodology and design specific engagement strategies for policy makers and the authorities, the odour emitting activities and the affected communities. 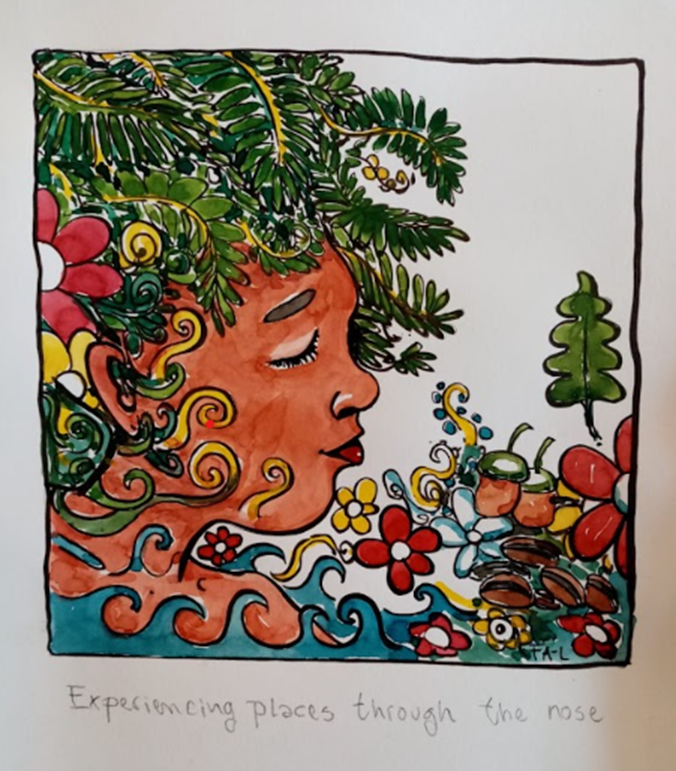 Illustration by Frits Ahlefeldt during the Engaging Citizen Science Conference 2022 at the Aarhus University https://drawnjournalism.com/2022/06/22/how-to-draw-smell/

The interview captures how D-NOSES managed to steer policy-makers to recognize the contribution that citizen science and more in general public participation could offer to tackle odour pollution. The project started locally, but had a clear strategy and put efforts in influencing higher levels of policy and regulation, including national, EU-level and even global (e.g. Latin America and Uganda). This was done through the deployment of the initiative’s resources, the curation of strategic contacts and an in-depth analysis of the policy and regulatory context for odour pollution. The steps followed by D-NOSES to influence the governmental agenda for odour can be of help and inspiration for other citizen science initiatives wishing to follow this example. The case also offers to policy-makers, researchers and citizen science communities an excellent example of successful impact on multi-level governance that coupled different tailored approaches and levels of administration in a way that mutually reinforce each other, towards a clear goal.

For questions on the experience of D-NOSES, feel free to contact: rosa.arias@scienceforchange.eu

*“Points out that additional efforts are needed to reduce the levels of odour pollution and sees the Industrial Emissions Directive (IED) as the main tool to combat odour pollution since it covers all forms of emissions. The CoR underlines the importance of citizen science and public participation for tackling odour pollution challenges. A multi-level approach including different inputs of various stakeholders can empower citizens to participate in decisions made about their environment and can support policy-makers and odour emitting activities to make informed decisions and better manage the issue of odour pollution.”